Interested in learning more about Hessen? Click below to read the description and find out more about:

Interested in learning more about Hessen? Click below to read the description and find out more about:

Geography and Cities:
The state of Hessen is situated in west-central Germany and has borders with Niedersachsen, Thüringen, Bayern, Baden-Württemberg, Rheinland-Pfalz and Nordrhein-Westfallen.
The principal cities of Hessen include Frankfurt am Main, Wiesbaden, Darmstadt, Offenbach, Hanau, Gießen, Wetzlar and Limburg in the greater Rhine Main Area, Fulda in the east and Kassel and Marburg an der Lahn in the north. The states capital city is Wiesbaden, and its largest city is Frankfurt am Main. 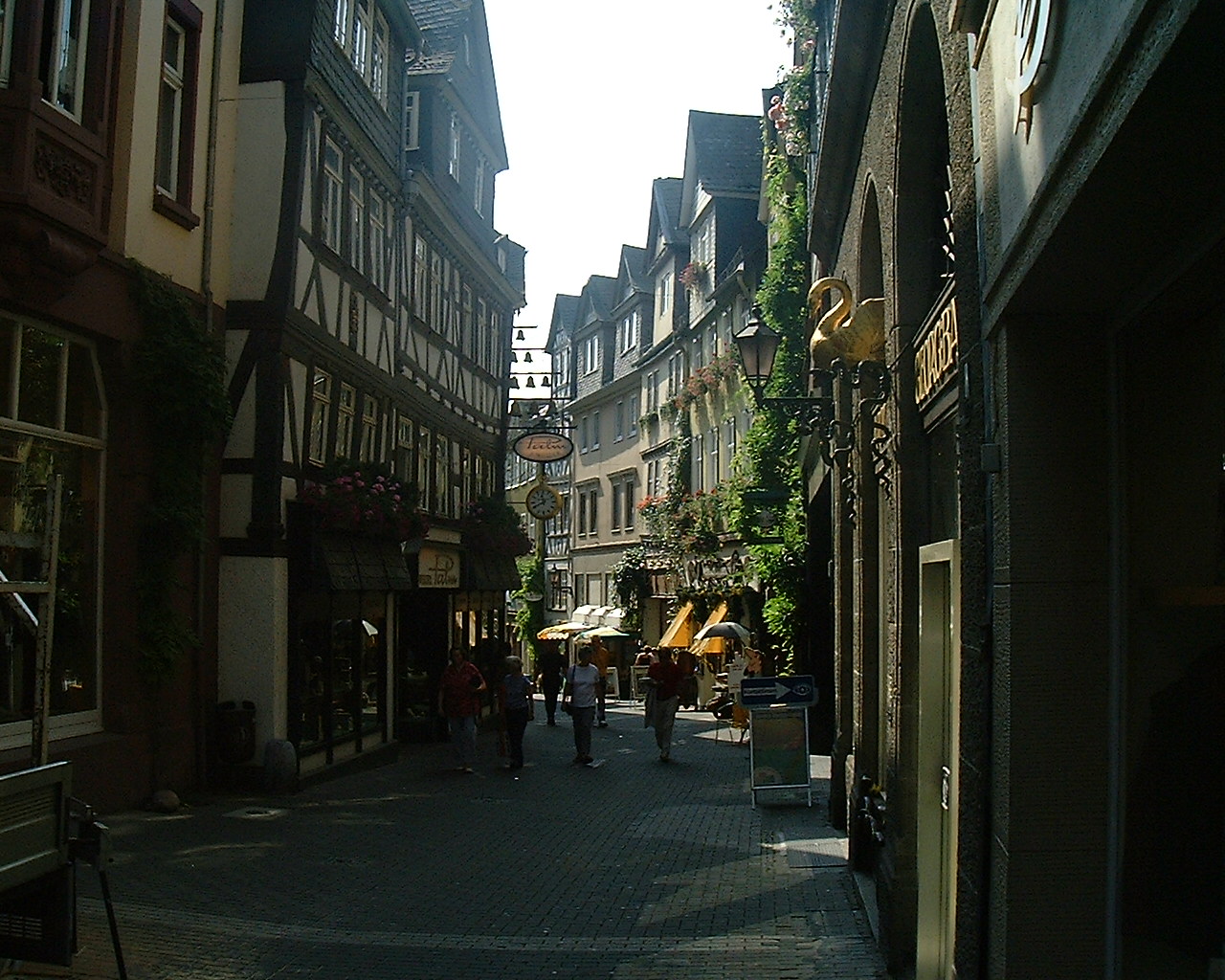 Kassel
Culture:
Hessen’s culture can best be experienced in its capital city Wiesbaden and in Frankfurt am Main, the state’s largest city.

Remnants of Wiesbaden’s vast history can be attested from the time of the Romans. The ruins of Aquae Mattiacorum remain in the city as a witness of those times.

The late XIX century and early XX century represents Wiesbaden’s period of growth. It developed itself in this period as a spa, convention city and administrative seat. It is regarded as the cities hay-day.
Kaiser Wilhelm II visited the city regularly in summer, such that it became an unofficial "summer residence". The city was also popular among the Russian nobility. In the wake of the imperial court, numerous nobles, artists and wealthy businessmen increasingly settled in the city. Many wealthy persons choose Wiesbaden as their retirement seat, as it offered leisure and medical treatment alike. In 1894, the present Hessian State Theater, designed by the Vienna architects Fellner and Helmer, was built on behalf of Kaiser Wilhelm II.

Hessian State Theater
Wiesbaden has long been famous for its thermal springs and spa. Use of thermal springs was first documented by the Romans. The business of spring bathing became important for Wiesbaden near the end of the middle Ages. By 1370, sixteen bath houses were in operation. By 1800, the city had 2,239 inhabitants and twenty-three bath houses. By 1900, Wiesbaden, with a population of 86.100, hosted 126.000 visitors annually. Famous visitors to the springs included Johann Wolfgang von Goethe, Fyodor Dostoevsky, Richard Wagner and Johannes Brahms. In those years there were more millionaires living in Wiesbaden than in any other city in Germany.

Gambling followed bathing en suite and in the 19th century Wiesbaden was famous for both. Its casino rivaled those of Bad Homburg, Baden-Baden and Monaco. In 1872, the Prussian-dominated Imperial government closed down all German gambling houses. The Wiesbaden casino was reopened in 1949.

Wiesbaden Casino “Spielhaus”
Main Sights in Wiesbaden:
The Palace Square (Schloßplatz) is situated in the center of the city, surrounded by several outstanding buildings. The ducal palace was begun under William, Duke of Nassau. Its foundations were laid in 1837 and it was completed in November 1841 (two years after William’s death). For the twenty-six remaining years of ducal authority it was the residence of the ruling family. It later served as a secondary residence for the King of Prussia 1866 to 1918. It was later used as headquarters for French and British occupying forces after WWI. Since 1945, the building has served as a parliamentary building for the federal state of Hessen.
The new town hall was built in 1887. Engraved in the paving in front of the town hall are the heraldic eagle of the Holy Roman Empire, the lion of Nassau and the fleur-de-lis of Wiesbaden. The old town hall, built in 1610, is the oldest preserved building in the city center and now is used as a civil registry office.

Marktkirche Wiesbaden
The monumental Neo-Classical Kurhaus (spa house) was built at the request of Kaiser Wilhelm II between 1904 and 1907. Its famous Spielbank casino is again in operation. In front of the Kurhaus is a lawn known as the Bowling Green. To one side of the Bowling Green is the Kurhaus Kolonnade. Built in 1827, the 129 meter structure is the longest hall in Europe supported by pillars. To the other side is the Theater Kolonade, built in 1839. It is adjacent to the Hessisches Staatstheather Wiesbaden, built between 1892 and 1894.

St. Bonifatius Cathedral, St. Elizabeth’s Church
Apart from the palace in the center, the ducal family had a large palace on the banks of the Rhine, known as Schloss Biebrich. This baroque building was erected in the first half of the 18th century.

North of the city is the Neroberg. From the top of this hill it is possible to view a panorama of the city. The Nerobergbahn funicular railway connects the city with the hill.
Frankfurt am Main:
Frankfurt is the largest city in the German state of Hessen and the fifth-largest city in Germany, with an estimated population of 2.300.000. The city is at the center of the larger Frankfurt Rhine-Main Metropolitan Region which has a population of 5.600.000 and is Germany’s second-largest metropolitan region.
Frankfurt am Main illustrates a perfect example of the old and the new with city landmarks stretching from the 14th to the 21st century.
Saint Bartholomew’s Cathedral, named after Bartholomew the Apostle, is a gothic building which was constructed in the 14th and 15th century. From 1356 onwards, kings of the Holy Roman Empire were elected in this church, and from 1562 to 1792, the Roman-German emperors were crowned here. Today it it’s the main church of Frankfurt.
Saint Paul’s Church is a national historic monument in Germany with great political symbolism, because it was the seat of the first democratically elected Parliament in 1848. Its importance has its root in the Frankfurt Parliament, which met in the church during the revolutionary years of 1848/49 in order to write a construction for a united Germany. The attempt failed because the monarchs of Prussia and Austria did not want to lose power, and in 1849 Prussian troops ended the democratic experiment by force of arms and the parliament was dissolved. Afterwards, the building was used for church services again.
Römer is the name of a complex of nine houses that form the Frankfurt city hall (Rathaus). The houses where acquired by the city council in 1405 from a wealthy merchant family. The middle houses became the city hall and was later connected with the neighboring buildings. Located on the upper floor is the Kaisersaal where the newly crowned emperors held their banquets.
The Alte Oper is a former opera house, hence the name Old Opera. It was built in 1880 by Richard Lucae. It was one of the major opera houses in Germany until it was heavily damaged in World War II. Until the late 1970s it was a ruin, nicknamed “Germany’s most beautiful ruin”

Due to public pressure it was finally fully reconstructed and reopened in 1981. Today it functions as a famous concert hall, while operas are performed at the “new” Oper Frankfurt.
Eschenheimer Turm was erected at the beginning of the 15th century and served as a city gate as part of the late-medieval fortification of Frankfurt.

Cuisine:
Apfelwein (apple wine or cider) is regionally known as “Ebbelwoi”, “Äppler”, or Stöffsche”. It has an alcohol content of 5.5%-7% and a tart, sour taste. It is traditionally served in a lozenge-shaped glass called “Geripptes”, a full glass is then called “Schoppen”

Grüne Soße, or locally ‘‘Grie Soß‘‘ is a sauce made with hardßboiled eggs, oil, vinegar, salt and generous amount of fresh herbs. Variants, often due to seasonal availability include dill, lovage, lemon balm and even spinach.

Handkäs mit Musik is a german regional sour milk cheese and a culinary specialty in the Rhine Main Region. The traditional way producing it is by hands, hence the name. Its topping with onions makes it Handkäs mit Musik because the onions are supposed to stimulate people to pass gas.

Frankfurter Kranz is a cake specialty believed to originate from Frankfurt.

Bethmännchen is a pastry made from marzipan with almond, powdered sugar, rosewater, flour and egg. It is usually baked for Christmas.
Economy:
When it comes down to discussing Hessen’s economy, one must automatically refer to Frankfurt am Main.

According to an annual study by Cushman&Wakefield, the European Cities Monitor, Frankfurt has been one of the top three cities for international companies. It is also the only German city considered to be an alpha world city as listed by the Loughborough University group’s 2010 inventory, which was a promotion from the group’s 2008 inventory when it was ranked as an alpha minus world city.

Hessen is one of the largest and healthiest economies in Germany. Its GDP in 2010 exceeded 225 billion Euros. This makes Hessen itself one of the largest economies in Europe and the 31st largest in the world. Some large companies’ headquartered in Hessen include Opel, Merck, Deutsche Bank, Commerzbank, Fraport, Fresenius, Sanofi Aventis, Procter & Gamble, B. Braun and Deutsche Börse. According to GDP-per-capita figures, Hessen is the wealthiest State in Germany.

Tourism:
The region of Hessen offers a whole host of holiday options. There is something for everyone – from culture, walking, cycling and wellness to family holidays, city breaks and outdoor adventures. Hessen is also quick and easy to get to, your holiday in the region can commence straightaway if you arrive at Frankfurt Airport.

Hessen’s main holiday destinations are characterized by variety, with the Frankfurt Rhine-Main region the leading choice for international visitors. Cultural attractions and nightlife are part of its broad appeal, but nature and the countryside are never too far away. The Odenwald forest and the hills of the Taunus, Vogelsberg and Spessart are a short drive from the center of Frankfurt. Top Taunus attractions include the huge Hessenpark open-air museum and the world’s only reconstructed Roman fort at the Saalburg near the UNESCO World Heritage Roman Limes.

Roman Fort Saalburg, Roman manuballista
The Vogelsberg uplands extend far into the Frankfurt hinterland and the region is home to delightful little spa resorts such as Bad Salzhausen, Bad Salzschlirf and Herbstein, as well as two of Hessen’s flagship cycle routes – The Vulkanradweg and BahnRadweg Hessen.

Bad Salzschlirf and Herbstein
Vogelsberg and Spessart hills meet in the Kinzigtal valley, whose landmarks include Emperor Barbarossa’s imperial palace in Gelnhausen and Hanau, the birthplace of the Brothers Grimm.

Grimm Brothers statue Hanau
Northern Hessen with its largely unspoiled natural scenery is the homeland of the Grimm Brothers. A major attraction here is the Kellerwald-Edersee National Park, whose forested hills sweep down to the shores of Lake Edersee, one of Germany’s largest reservoirs and a water sport paradise. The healthcare recruitment climate has changed over the past 7 years. Follow this interview to see...
The interview takes place at the medical job fair where hundreds of medical professionals and...
Thousands of medical specialists consider the jobs offered abroad by the recruiting agencies in...